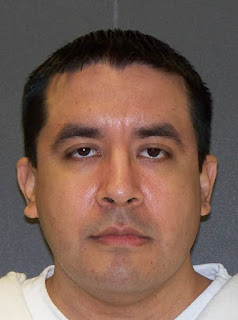 We all have our emotional baggage to deal with, but Rosendo Rodriguez had more than most people.

Rodriguez, known as the “Suitcase Killer,’ was executed tonight by the state of Texas. Rodriguez earned his death sentence for killing and sexually assaulting a pregnant prostitute in 2005 then disposing of her body by stuffing it inside a suitcase and then tossing the suitcase in a Dumpster. After his arrest for that crime, he confessed to killing another woman and disposing of her body the same way.

Because Texas no longer allows special last meal requests, Rodriguez had the same food as others in his unit. For his last meal, Rosendo Rodriguez had pepper steak, steamed rice, brown gravy, vegetable blend, black-eyed peas, cornbread, chilled pasta salad, and a choice of water, tea, or punch to drink.
Posted by Last Suppers at 11:04 PM No comments: 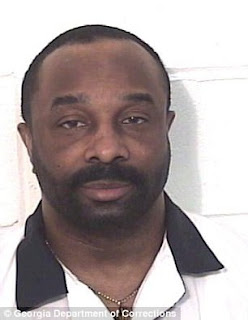 Before Carlton Gary, AKA the Stocking Strangler, was executed by the state of Georgia late last night, he was asked if he wanted to make a final statement. Gary said no.

Gary also said no to the offer of a final prayer. And he declined to eat any of his last meal. Oh, and he also declined to order a special last meal in the first place, so he was served the same "institutional tray" as others in his unit: a hamburger, a hot dog, white beans, coleslaw, and a grape beverage.

For the man who was convicted of raping and strangling three elderly women with their own stockings, his last night was a parade of no's, because he also held steadfastly to his claim of innocence.

No confession. No remorse. No last meal. No last words. No kidding.
Posted by Last Suppers at 9:08 AM No comments: 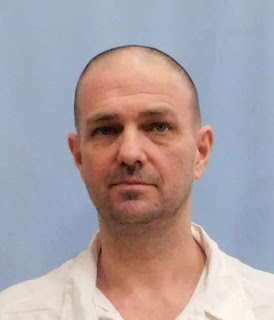 We have to admit it; when someone with a name like Michael Eggers is executed, we secretly pray that he'll order breakfast for his last meal. Maybe a nice omelette, or a plate of scrambled or poached or fried...well, you get it. Unfortunately, however, Eggers's last meal wasn't all it was cracked up to be. The convicted killer who earned his death sentence in Alabama for killing a 67-year-old former employer ordered no last meal at all, breakfast-themed or not. Instead, he just had what everyone else on his cell block was having for dinner tonight.

For his last meal, Eggers had chicken creole, dirty rice, turnip greens, cornbread, cream corn, cake, and a grape drink. And while this Cajun feast does sound pretty tasty, it leaves few opportunities for puns.

Eggers also declined to say any last words before his execution. When the female warden asked if he wished to make a final statement, Eggers simply said, "No, ma'am."

Or is it possible that he really said, "No ham?"

One can only hope.
Posted by Last Suppers at 9:16 PM No comments: